This is our first post in a series on mobile technology’s proliferation and impact on the poor in emerging markets. We will highlight the players that helped create demand and the innovative ideas that continue to drive it.

Numerous studies have proven that connectivity increases income. For example, Robert Jensen, economics professor at Harvard, developed a study that tracked fishermen in southern India. The study found that by investing in cell phones, fishermen were able to quickly contact potential buyers for their daily catch, enabling faster and more efficient trading that increased their revenues by 8% and decreased the overall market price of fish by 4%.

In 1996 Grameen Telecom pioneered the concept that mobile phones had a market at the bottom of the pyramid. Created through a joint initiative between Dr. Muhammad Yunus and Iqbal Quadir, the Village Phone combined microfinance and mobile technology in order to microfranchise access to mobile services.

The model enabled entrepreneurial women in Bangladesh to start a business through the purchase of a mobile phone with financing from the Grameen Bank.  These Village Phone operators would then charge other villagers for its use, generating revenue that enabled them to pay back the loan and eventually realize profitability. Since 1996, Grameen Telecom has grown to over 270,000 Village Phone operators in 50,000 villages across three countries.

The success of the Grameen Phone is important not only because of how it directly increased access to mobile services, but also in that it proved the viability of a previously untapped market. It showed the world that there was a vastly unmet demand for mobile technology at the BOP and demonstrated how mobile connectivity can benefit both businesses and the people they serve. 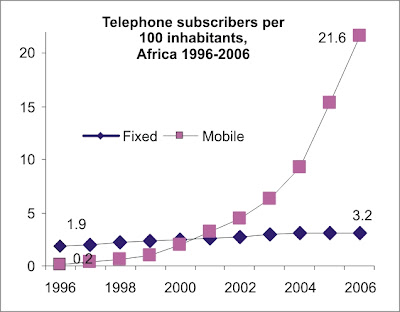 Since 1996 the explosion of mobile access has been global.  Mobile penetration in Bangladesh jumped from 0.0034% to 28% in 2008.  In Angola, it went from 0.25% to 39%. The growth trend has been even greater in Senegal, Ghana, Nigeria, Uganda and Colombia, which now boast 88% penetration rates (comparable to those of the United States and France at 88% and 94% respectively[4].) Looking at mobile penetration increases in the last decade, and extrapolating the trend[5], it is clear a vast majority of the world will be connected via mobile very soon.[6]

Obviously the main barrier to increasing mobile penetration rates is the high upfront cost of mobile phones. Although the Village Phone is relatively inexpensive to access, it only allows people to communicate on a limited basis. People using the Grameen Phone cannot receive text messages and lack a unique phone number that they can provide to others.

To benefit from accessibility, users at the BOP need to own a mobile handset or at least have greater flexibility than what can be provided by a Village Phone Operator. Yet despite a growing array of ultra low cost handsets (ULCHs) like the Vodafone 150 (retailing for $15 in India and Africa), mobile handsets are still too expensive for many users.

Phone Sharing Beyond the Village Phone

Until phone prices drop further, phone sharing will remain a prevalent method of enabling accessibility.  However, sharing a number is no longer required. Today, users are able to purchase Sim cards that come loaded with minutes – an individual can then swap Sim cards in and out of shared phones in order to access their own contact lists and use only their own minutes.

More recently a technology known as the Virtual Sim has surfaced. The Virtual Sim functions just like a traditional SIM card except that it is cloud-based and is virtually transferred from phone to phone with a code. Using a borrowed handset, Virtual Sim users input a code to “flash” the handset and access their own information. Privacy is protected as they cannot access the phone’s original phonebook and call log. When they are done using the phone, they log out and it returns to the owner’s original settings.

Companies like Comviva[7] and Movirtu[8] have developed Virtual SIM platforms that allow phone-sharing on any handset. In Movirtu’s case, when the owner of a mobile handset shares their phone with a friend they receive a small payment from the telecom operator –transforming virtually any mobile phone owner into a Village Phone operator.

Where We Go from Here

The Village Phone, Comviva and Movirtu have shown that the world is now well on the path to increasing accessibility and affordability and that soon enough the entire world will be connected.  Innovative technologies and business models continue to drive down the cost of mobile ownership both by lowering the upfront costs of handsets and by creating flexibility with pay-as-you-go airtime and phone sharing.  This is good for social and financial inclusion of the poor, and will ultimately provide a powerful platform to bridge the gap between the developed and developing world.